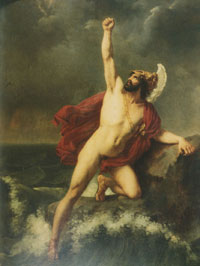 Mitrou is situated in the region of East Lokris, famous as the site of Herakles’ death and funeral pyre. It was also home to two Homeric heroes, Achilles’ companion Patroklos and the infamous Ajax of Lokris. Here, too, lived the mythical huntress, Atalanta, the only woman to join Jason and the Argonauts. Atalanta is also famous for participating in the hunt of the Calydonian boar, for her prodigious speed and wrestling ability, and for allowing Hippomenes’ golden apples to distract her from the race in which her hand in marriage was the prize. Finally, East Lokris was home to Deucalion and Pyrrha, the sole survivors of classical myth’s flood story. After Zeus decided to wash away the evil race of men and start afresh, he selected Deucalion and Pyrrha, the only decent couple in the world, to repopulate the world. Moving from myth to history, Mitrou may have served as a port city for the powerful Minyan city of Orchomenos, just 20 km. to the southwest. Located on the periphery of the Mycenaean world, Mitrou offers evidence of life away from the major cities of the period. Because Mitrou is located near Thermopylae, on a land corridor leading from northern to southern Greece, it offers exciting possibilities for information about presumed major population movements in the Bronze Age, such as “the Coming of the Greeks” in the late 3rd millenium B.C., and “the Coming of the Dorians” at the end of the Bronze Age. Currently there is virtually no knowledge of the Bronze Age in this area, and Mitrou offers the opportunity to gain an understanding of crucial periods of transition in Bronze Age Greece.

University of Tennessee Department of Classics

The flagship campus of the University of Tennessee System and partner in the Tennessee Transfer Pathway.